A couple of weeks ago I tweeted that I was finally putting my hand in my pocket and paying for some private physio. I went to the Cotswold Physiotherapy which is close to where I live. I used them a few years ago when i had hamstring problems - I was impressed then and as I can walk to them it made sense.

What I was looking for was a clarified diagnosis of my right knee problem. I did it in November and while it does feel better it feels a long way from fine. My worry was that it needed surgery (I thought it might be a meniscus) and I had wasted 6 months doing pretty much nothing.

After some manipulation I was relieved to hear that there was nothing wrong with the knee joint that would need surgery. The problem I have is now probably a compensatory issue from the original injury in November last year. The hamstring is inflexible and the tendons are very rigid. In short the remedy is stretching, more stretching and foam roller. Also as the injury is muscular it means that I should try to train through it. So that means I can start to run a bit and so long as I don't overdo it I won't be doing more damage.

So what's the point of this blog? Well I wanted to describe the difference in physiotherapy experience you get from the hospital and from a private clinic. This is not me bashing the NHS - far from it - as a diabetic I receive incredible care and support from the NHS and would never criticise them.

Funnily enough the main difference is that the private physio experience is a more hands on one. So I have had the knee mechanics checked out thoroughly which was the same in both clinics. However beyond that the NHS physio did no physical manipulation or massage of the injury at all. At the private clinic I have had massage of the area, a laser treatment, taping and support in terms of educating me how to really get in and stretch the issue area. Now there might be an easy explanation for this which is time. The NHS clinic time per patient might be a lot less. Also the NHS clinic might be a sausage factory with many more patients in the day meaning that if they manipulated each patient they would not be able to withstand the physical demand that would place on them. I remember years back when i was seeing a chiropractor being told that she had to have chiropractor treatments herself such was the wear and tear on her body.

Whatever the differences, i am currently in an improving place. I have done a couple of 5km runs on gym treadmills since being treated by the physio and today, the first time since November, ran to and from work. It's just over 2.5 miles which is a nice distance as i can just take it easy and it not take too long. The run in was fine, felt the knee about a mile in then it just went as the movement continued. Then all day today no issues at all. Coming home it was a little sore most of the way then did settle with about a mile to go. I actually don't care - i ran 5 miles today something that seemed a long way off until only recently.

This week i also bought myself some new running shoes. Some Brooks Defyance from the local Up and Running store. One thing i had noticed when on the treadmill was that my Brooks Pure Project shoes are not that cushioned and that to preserve my knee on the comeback i could do with some. They are a lovely shoe to run in and i think cement my loyalty to Brooks. I can now literally just put any pair of them on and they feel great. Like they were made for me. 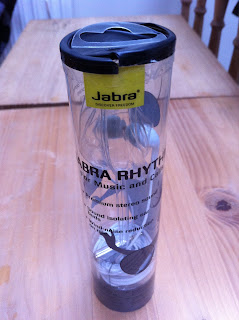 I was given a set of these Jabra Rhythm headphones to try out.

When i saw the packaging i was a little disappointed as there's nothing different from the many ear-bud style headphones you see hanging from racks in your electrical retailer of choice. On removing them from the packaging the first thing that struck me was the build quality of the jack plug and the adapter that enables it to work with Nokia and Sony phones. This was very impressive, made of metal and with a very solid/robust feel to it. On engaging the adapter, which i won't need as i am an iPhone user, there was a reassuringly solid fit.

The cable length is good and it has the style of cabling where the left ear cable is attached to the main one and shorter rather than a single cable that splits (like the standard iPhone headphones do). There is the microphone with button to play whatever is on your iPhone and a clip so that you can secure the cable from flapping about if you are using them to run or something more active. So far so good.

I am an iPhone user, as i mentioned, and tend to listen mainly to podcasts, Talk Ultra, Marathon Talk, Guardian Football Weekly, The Game by The Times are a few that regularly flood my ears. I normally listen to these while i am out walking my dog. The problem i have been having is that to be able to hear anything through the iPhone earphones i am constantly pushing them deeper into my ear and this is with the volume already at full. Simply with normal background noise and spoken word podcasts they were not man enough for the job.

The Jabra Rhythm is a different story altogether. The ear bud fits snugly into the ear, it's not moving. I hit play (using the remote on the wire) and had to reduce the volume, this is unheard of. I then took them out (with the dog) and was really impressed with them. They have noise cancelling technology which just works. I didn't have to fiddlle with the buds in my ear or rewind the podcast to re-listen to something i had missed or even try and squeeze a few extra decibels out of my iPhone by pressing the increase volume button despite already being (and knowing that) it was at the max.

When I got home I experimented with the Jabra's playing some music. My comparison ear phones are not great as they are the out of the box iphone ones but the Jabra's performance is excellent. The sound quality was excellent, no distortion or tinny sounds and theiPhone  volume does not have to be at the max in order to hear the music. I tried a variety of music just to see and, again i'm no expert, but all types of music were handled equally well. Radiohead, Coldplay some instrumental stuff (Drive soundtrack) and even some chart rubbish that the kids listen to all sounfed, er great!

I have used them once for a call and they performed exactly as you would expect, i could hear the caller and they could hear me. I was outside and checked with the caller if there was a lot of background noise or anything and they confirmed there wasn't.

All of which leaves me in the position of having a very nice set of ear phones that work as i want them to. They look like every other headphone (white), they sound great and block outside noise. Frankly they are what the iPhone ones should be but aren't.

Would i buy these? Definitely, for less than £20 they are excellent.

In my affiliation with Leckhampton Rovers FC I have taken it upon myself to organise a kids duathlon for late June / early July. The races will be for u6 through to u12 children and take place on a local school playing field marked out for 400m.

I'm going to get the applications designed and ready this weekend and start publicity through the managers and via the club website: www.leckhamptonrovers.co.uk. What I then need to do is organise the event! I have identified the race distances for each age group and a sliding scale for entry based on age too.

I need to get race numbers priced and ordered, medals too as I'd like every kid that finishes to get one. The achievement will be finishing as this is a new experience for most. Marshalling at each race will be by volunteer with, I hope, plenty of parents stepping up to get involved and support their kids by helping.

I have the club chairman checking the venue and what additional health and safety requirements there may be.

I'd love to get a sponsor for this event so if anyone can help with that please get in touch.

On paper it looks simple:

Is there anything missing? I'm sure there are lots of you that have done something similar so any advice, suggestions or lessons learned please either leave a comment or mail/tweet me.

If one kid is inspired from this humble beginning to continue in this field then it will have been a success.