If you look at running shoes there's very little by way of true innovation. Funky colours maybe, interesting lacing systems, minimalist or maximalist but essentially they look the same. A rubber outersole, EVA midsole then the last. End of.

That's not the case with ON Running who have developed a truly innovative sole that is comprised of clouds. There's an upper and some EVA (not a lot) then these clouds that sit along the sole and provide the ride. The tagline is land soft and take off hard.

I have seen these shoes being advertised more and more then heard that Rich Roll was wearing them for his this is 50 training stuff he's doing for Otillo. As i looked closer i found a review on the Ultrarunner Podcast that kind of finished the seduction. 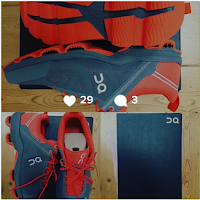 The first thing i noticed about these shoes out of the box was that they do not feel like a traditional shoe. They feel rigid in the hand yet when you put your foot in they do not feel that way at all. The heel cup and shoe opening allow the foot to slide in very easily and more importantly out with minimal effort. This will be useful, incredibly so, at the end of a long run when you don't want to have to fight your footwear.


The Cloudsurfers i have are neutral and i wear them with my custom orthotics (for collapsing arches).

When i put them on initially the comfort strikes you immediately, i'm not a heel striker (when i run) but walking in these felt soft and easy. As i left the house this morning to run i felt a bit like one of those dogs that you see on the internet wearing shoes. It's unnatural and just plain odd.

As i started to jog i could feel the spring in the shoes. The landing was soft and the take off responsive. But the spring made it feel that my legs were flying about. They weren't but it felt like that. They also felt fast. I did wonder if my mile splits would show this and they don't so it was all perception. I guess on reflection they just felt different.

The upper is knitted and double layered. It's a very fine knit much more so than the Ultraboosts i have which are my only experience of knitted shoes. They have a squared off toe box that has some stiffer protection around the toe overlaid on the knitted upper. The double layer is red underneath with the grey on the top. The upper is grey with a red heel cup, tongue and sole. Nice styling. The shoes have nice detailing with the ON logo and some piping in highly reflective material.

Putting them on is easy, the foot just slides in. The lacing system is best described as traditional. This is the only drawback i can see really. That the shoes have lace-ups is fine, I have no problem with that but what i don't like is the supplied laces. They are super skinny and do not really get any purchase on each other. The laces are like the ones in the Salomon S-Lock system but without the locking. I would prefer them to have a thicker lace that would grip against the other when they were tied.

This is a small issue.

Running this morning, once i had settled down into my rhythm, felt great. The shoes are incredibly comfortable; they feel really soft on landing and responsive on take-off. I felt like my stride was being tuned, i was picking up my heels much more than normal. I try to do this but know i lapse into that inefficient shuffle that long distance runners at the back/middle of the pack do. I know this was happening this morning as for the remainder of the day i could feel the run in my calves.

They look good and they encourage good form - excellent!

They are eye catching too - i saw a couple of my running buddies and they immediately spotted the shoes and were inquisitive about them. They are that kind of shoe.

Its very easy to be seduced by new gear. New shoes in particular always feel great out of the box, a little less so after a few hundred miles. I also know that i am always seduced by kit and generally love everything i have to do with running.

This review is based on 5 miles of running, nowhere near enough to make a proper judgement but enough to say that i like them. I have a rest day tomorrow and then on Sunday am planning an 8 mile run in them. This will be a test of both the shoe and me. I'm pretty excited about this and have high hopes for the shoe and how it will perform and what impact it will have on my running.

I will provide an update once i have run a couple hundred miles. First impressions are that these are going to be a hit!
Posted by justmmb at 10:22 PM

What is core strength?

Anyone that knows me knows I've had my injury issues. Many different running injuries over quite a period of time.  Frustrating doesn't begin to describe it.

With age the injury niggles have increased and I guess that as I am only going to get older I can look forward to more. But it doesn't have to be like this. Yes age or rather advancing years is the issue but only because of a failure on my part to do the other work necessary to stay fit.

What's the secret? Who do I sell my soul to?

What do I need to sacrifice at full moon to get this insight.

What's the secret? It's all about core. Sorry.

Like most runners my core routine would comprise a couple of 20 second planks a couple times a week. Ok, a couple times a month. Maybe less. I'd also add a little bit of regular foam rolling and some hockey ball massage.

But core strength, that's different and takes effort. I actually think that most runners don't know what it is and don't know how to build it. I didn't.

At one of my physio appointments it was described to me that people hang on their ligaments rather than use their muscles. You can see this everywhere. Poor posture; rounded backs, shoulders coming forwards, dropped hips. So many people are like this. It is the product of the lives we lead. We spend far too much time sitting, far too much time hunched over keyboards and smartphones. This is directly proportional to the lack of physical effort in our normal lives.

To hold yourself properly when you're sat or moving takes muscle. Not eye popping bulging muscle we aren't talking Schwarzenegger here!!

To build the muscle required takes consistent effort and yet most runners given some time to train will opt for a run over anything else. Running got them fit in the first place so it will keep them fit. There's also the nagging doubt that if I don't run I'll lose fitness and my favourite, I'll put on weight if I strength train and it will make me slower.

But it doesn't address what is core fitness and how do you get it? For me it's been an interesting journey and taken some months. It's about consistency and doing the right things. It's not all lifting massive weights, it's not really about that at all.

Next time you run take a moment to asses your posture. You should be on the mid/front foot, leaning from the ankles your arms should be powering forward and importantly your heels should be coming up to your backside and your shoulders should be back.
This video shows really well the correct posture for running

If you cannot run like this then chances are it is strength that's the missing ingredient.

For me it started through working with Martin at No Limit Fitness and assessing how bad my posture was. Years spent sat down at a desk tapping onto a computer keyboard take a toll. Shoulders come forward and roll. I also had little flexibility through my hips and no stability. Sure, I could run a long way but what sort of condition would I be in when I got there?

This video shows this brilliantly!!

My strength training is 2-2.5hrs per week at the Trimnasium. It's been low weight. It's a mixture of functional movement and traditional weights. I've done more squats Iin the last 6 months than in my whole life previous. Yes I have put on some weight but it is the right sort of weight.

My regimen includes some of the following on a regular basis,

*a 20kg bar across the shoulders with a 5kg weight on one side to unbalance and work the core more through a routine of lunges.

Notice whats's missing from that list? There's no crunches in there at all.

None of these exercises is with large weights either as this does not work with what you need to be a runner. What it's about is strength to be able run.

The outcome of all this is still work in progress but the improvement to my injuries has been significant. My hips are getting stronger and I no longer 'hang on my ligaments'. I know I hold myself better, sometimes without realising and others very deliberately. Where i have the option I sit on stools with no backs so i can keep upright, engage my core and activate it. I am more aware than ever before and it shows. My shoulders are back, my back straighter and my hips are stronger than before. When i run i can feel my chest is more open and i run much more upright, initially this felt slower, it isn't it just feels different.

Core strength is something that everyone needs. If you want to continue running and run injury and niggle free then it is even more important than that. Set aside a couple of hours and get on with it!

What are you waiting for? 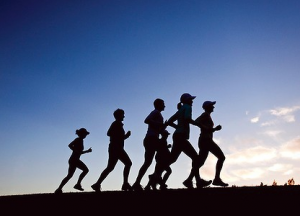