I have blogged previously about my ambitions for 2010 which is to take a triathlon sabbatical and compete in running events. I am sure my triathlon days are not over but I want a new challenge and I want it to be an endurance challenge. So I have been considering the Thames Trot which is a 50mile point to point from to Henley on .  The race is on February 6th and I have an 18week training plan that looks achievable (removing two disciplines from training frees a lot of potential time) and starts on Monday 5th October. 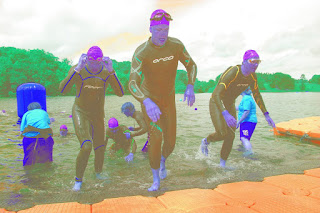 Sunday saw an early start and another brick session. This was Darren’s (www.twitter.com/thebooy) final outing, for the time being at least, with the Shurdington Tri Club as he will be heading to Melbourne in the next 10days to set-up a new branch of the club – from small acorns we will be truly global J

The off was at 7am with a 33km route on the bike planned to take in Bishops Cleeve where Booy senior was waiting astride his new Scott Speedster! This was to be followed by a 7km run with a handicap system. Darren to start with Le Fassett following after 2:30 and then me after another 2:30.

It was a much cooler morning than we have been used to and was actually a little darker than normal, there was also quite a fog hanging around. So much so that it was not feasible to ride in glasses as the fog was collecting on them and making them wet and impossible to see through. On the couple of peaks on the ride the sun was evident and the day looked like being a good one. We made good pace to Bishops Cleeve where we let Booy Jnr. lead out to meet his father – we played the Hushovd and Farrar to his Cavendish!

After introductions team Scott (two of us were on Speedster S30’s and one on an S40) then continued up through Woodmancote along to Prestbury and then back through Cheltenham at a reasonable pace. There was a breakaway on Bath Road by the Booy’s who must have thought they were riding for Rabbobank but this was quickly snuffed out.

As we got to Shurdington Road the pace quickened and there was some jockeying for position between Le Fassett and I. Le Fassett eventually went for longer than I could hold on and put in a 10m gap. I got my breath back and tried again, got to his back wheel and we both pushed hard across the line neither of us able to make the break through.

I am under no illusions though had it not been for Le Fassett’s exertions in breaking his tri-duck on the Saturday I would not have been able to compete on that home stretch. The Booy’s crossed the ‘line’ moments later in much better condition. We said our goodbye to the Snr. as he prepared to cycle back through to Bishops Cleeve and got ready for the run.

Darren set-off up the road, his familiar loping style. Le Fassett and I did consider just getting a coffee and sitting on the drive waiting for him to come round but thought better of it! After what seemed like an age but was 2minutes 30seconds Le Fassett set-off in pursuit. I then followed a further 2min 30secs back.

It was an interesting run, having been stood around for a few minutes I was stiffer than I normally am going from bike to run. I was also mindful of blowing up – knowing I had to catch the others I had to rein myself in from going to hard. Lucky the route is such that there is good visibility so I could see Le Fassett ahead and had something to aim for. A case of not getting too carried away in the early part of the run. We reached the Norwood about 1/3 in and ahead I could see that Le Fassett was gaining on Darren. I increased the pace a bit as my ego wanted me to catch Darren before Le Fassett did but that was clearly not going to happen. Le Fassett passed Darren and a couple of minutes later I managed to as well. I then slowed to recover before pushing on and catching Le Fassett.

When I reached him I slowed down a little then as we hit a slight rise put the hammer down and dropped him. It was then a nice run back to my place – I kept the pace up as was feeling pretty fast by this time. I then managed a PB for that run in a brick session of 00:28:58. Le Fassett came in just short of 2minutes later with Darren around 3-4mins after him.

It was an excellent run session and I think that we all pushed ourselves harder than normal as we were either being chased or chasing. A good way to get a PB but not something to be done everytime! With the Cheltenham Triathlon at the end of September this is a good way to get some speed into the legs!

So Darren now heads off to the Australian Summer as we head into Winter – he will be missed not least of all by me as I will now be last on the hills around Cheltenham ;)
Posted by justmmb at 7:53 PM