I got these shoes to replace the Salomon Sense 3's that i had and that were faulty. As the Sense 3's were not available in my size as a replacement i opted to upgrade and pay the difference to get a pair of the Salomon Sonic Pro's. I'd seen them in the emails that i get from various running organisation, blogs and shops. They looked to have a similar shape and styling but me more of a road shoe than a hybrid or trail. I then read the reviews from Ultrarunner Podcast and that was it - decision made.

They arrived last week and like a kid with a new anything i wanted to test them out. What better than a hilly 19 miler. Out of the box i did just that. Remember when you used to have to break shoes in before using them properly? Me neither. 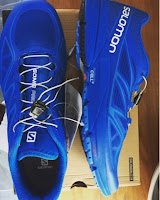 The fit was familiar, like i mention it is very similar to the Sense 3, but the shoe feels very different. It's super light and the lock lacing system seems better than i have had before. Just the right amount of 'lace' and really secure. Of course the toggle tucks away into the tongue as on all Salomons.

Sunday's run ended up being 19 miles with 1,800ft of climb. I'm training for the Cheltenham Challenge Ultra so hills need to become part of my running life. The route was predominantly road but i did come down of Leckhampton Hill via a woodland trail path and some fields. 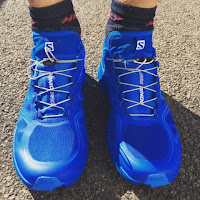 The shoes were great, they are great. There were no rubs or issues with fit - they were secure and even though it was also warm and my feet were sweating they gave me zero issues.

19.3 miles out of the box with not a single issue is really impressive.

Subsequent to Sunday i have run a further 26 miles or so in them this week entirely on tarmac. They still feel good but i am noticing that they are a little unforgiving compared to the Adidas Ultra Boost i normally wear. So much so that i think i will for 100% tarmac runs revert to the Boosts. The Sonic is a lovely shoe but, for me just not enough cushioning to make it a road shoe that i could wear exclusively. I will use it as a spring/summer trail shoe. I will also wear it in June for the Cheltenham Challenge ultra which will have a mix of terrain making this shoe the perfect choice.

I'll review these again in a few weeks when they have done more mileage to see how durable they prove.

I should start by saying I'm a Salomon fan-boy. I love their stuff; caps, hats, jackets, calf guards, race vests, soft flasks everything. Oh and shoes. I've had a couple pairs of trail shoes, some Fell shoes that are so old I don't think they even have a name. Mission XR's that are awesome and recently some S-lab Sense 3's.
The latter are what I am talking about here and this review will be a little mixed.
The shoes look great, I mean really great. The styling is excellent. They are red with the white heel cap. I wear a size 9 and have my own orthotics that I use in every running shoe I have. 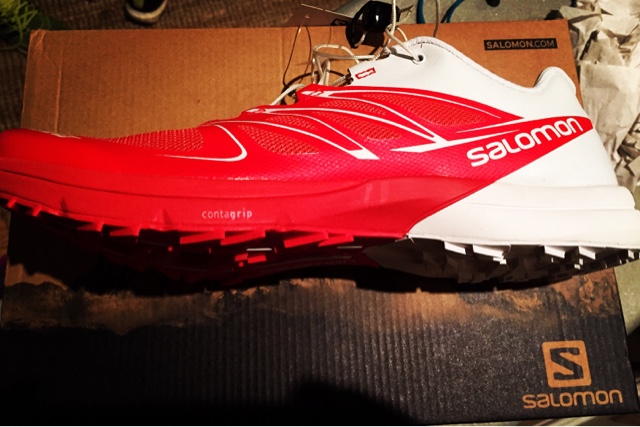 I bought the shoes to wear at the Green Man ultra in March. That was 46 miles of trails and puddles and mud. It was a brutal course and the shoes were great. That I was able to wear them and not get a single blister or rub after only having run maybe 11 miles in them shows how incredible a shoe they are. There's no wearing in required, they were more or less box fresh and gave me zero issues. They were also solid on a very challenging mucky course. I did not slip or fall.
After the Green Man I was so confident in the shoes that I decided to wear these for the W2C challenge in April. This was to be a 4 day ultra marathon challenge with the last 3 days being predominantly trail. Having run 29.5 miles on day 1 in some Ultraboosts I used the Salomon's for days 2, 3 and 4 which over the three days would be 112 miles of running. The shoes were fantastic; they were comfortable, coped with the terrain and felt solid throughout. They were fine on the Tarmac stretches and wonderful on the trails.
These shoes are so light they barely register. So light you imagine they cannot be durable. That was a little problem.
By the end of day 2 of the W2C a hole had developed in the toe box where the mesh section joins to toe guard. I finished the W2C in the shoes but considered that after 208 miles in total this wasn't really acceptable.
A perfect shoe that had an imperfection. I don't know if others have experienced this issue with these shoes or whether the ones I had were maybe faulty. It was disappointing though as the shoe is pure class.
I contacted Sportsshoes.com who I had bought the shoes from. They provided impeccable service requesting that I return the shoes. They had them and contacted me by phone to advise that they were faulty but that they didn't have any more of that shoe in my size. I paid a little extra and am now awaiting a pair of the Salomon Sonics in blue. I know the colour isn't important but they look cool too!
Back to the Sense 3's, I loved the shoe and it was excellent in 4 ultra distance runs that I used them in. Genuinely no issues whatsoever. It is a shame they were not a little more durable as I'd still like to have them. I hope that the pair I had was faulty and that it's not an issue across that model.
I'm still a Salomon fanboy though, if they are good enough for Killian...
Posted by justmmb at 7:57 PM