Tapering for the Green Man Ultra...

This week is a tapering week. I hate tapering, I don't know anyone who likes it really. You go from running miles and miles to suddenly nothing or more of less nothing. It feels like nothing.
A couple of weeks ago I was chatting to a colleague that runs, he really runs, he's done something like 180 marathons and ultra's. He was describing how he runs around 80-100 miles a week by running long runs to work and then long runs home. I do the same but had always stopped short of running proper longer commutes. Inspired and motivated by this I upped my game and did a couple of weeks of 60+ miles without any really issue or impact at home. Longer runs in the morning and afternoon easily giving me 10'ish miles a day with then longer runs at weekends. So simple I don't know why I didn't think of it myself really. It was a bit like I needed permission. I had a mental block on going beyond 50 miles. Hearing someone in a similar position to me talk about regularly getting close to doubling that gave me the drive to push through an artificial ceiling.
Why do we continually constrain what we are capable of for no good reason?
After a couple of 60+weeks last week was a gentle climb down to 38 miles last week, this week will be 4/3 and 2miles on Tues/Weds/Thurs ahead of 45miles on Saturday at the Green Man Ultra.
My third ultra. It took me a couple of years to do my first as injury took its inevitable toll. in my second ultra I injured myself, damaging my hip flexor in a fall. That knocked out the rest of the year and more. In fact the GMU is 13 months after my last ultra. When I hear about people running races and events every weekend I don't know how they do it.
I am feeling strong and I am feeling fit. I've changed a number of things over the last 13 months.
I took a break from running with structure and just ran how far I felt like and with the intensity that I felt like. That was quite liberating and, if anything, made me understand just how much I want to run and maybe even need to run. With nothing to run for I still ran regularly, rain or shine.
I've also moved to a much more plant based diet. I'd like to say i'm vegan but I'm not 100%. I'd say I'm predominantly vegan not that it really needs a label. I was already vegetarian but eating lot of dairy - removing that was easier than I expected as there are a stack of alternatives and I don't really miss it. OK, I miss custard but there are Alpro alternatives and you can make it just as good with soya or almond milk.  What is hard is that there is milk powder in a lot of products and while I try and make choices to avoid them it's not always possible. Hence predominantly vegan.
Since making this dietary change I have dropped around 10lbs in weight. I don't want for energy at all and genuinely feel great. It's difficult to quantify how great you feel or if it is even different to before. I have to think that it is different and that the impact is positive. I'm having blood tests in a few weeks, it will be interesting to see what my cholesterol numbers are compared to the last set as they straddle the dietary change.
The other change has been yoga! I bang on about this all the time and have blogged about it more than once. It's been great for me. I feel stronger and feel like I have something like core strength which I haven't really had before! I've never done strength training or stretching, I love the rigour of going to the session weekly and the benefits have been and continue to be huge.
All of which means there's an ultra marathon on Saturday! I'm excited about it but nervous too. Maybe a little more nervous than excited. When it's so close I just want it to be here and to be over. When I'm in the run I'm fine. I just need it to happen and get going. The last few days are torture. I stress about kit choices and what I should pack incessantly. Will it be wet or cold or both? It drives me mad, too many variable and too many choices. Maybe it's the project manager in me wanting to control everything and being in control of nothing!
The next few days will be spent watching the weather, stressing over kit and not running. It will be hell. Perhaps I should get some perspective.
Posted by justmmb at 10:56 AM

As someone that runs a lot and runs a lot on roads and pavements I often distract myself and use the time to listen music and podcasts. It's a great way to make a less than exciting environment interesting. I love running but on roads the distraction is welcome. If I go off road then I never wear headphones as you need your wits about you and, well, it would spoil a natural experience.
I have been using some Adidas/Sennheiser running headphones for the last couple of years. They've been great, good fit, good sound, reliable and durable.
What I really disliked was trying to feed wires under clothing and through bags to keep them out of the way.  I know, I know, meanwhile in Syria. This is very much a first world non-problem and as much as it was frustrating I used very little energy over it.
I did start to notice the rise of Bluetooth headphones- I think it was the Beats wireless ones that caught my attention. The price, though, was prohibitive. Looking around online I started to see some Sony ones, specifically the catchily named MDR-AS800BT's. I know Sony, I like Sony so thought I would go for them.
They were duly added to my Amazon wish list and Santa did not disappoint. 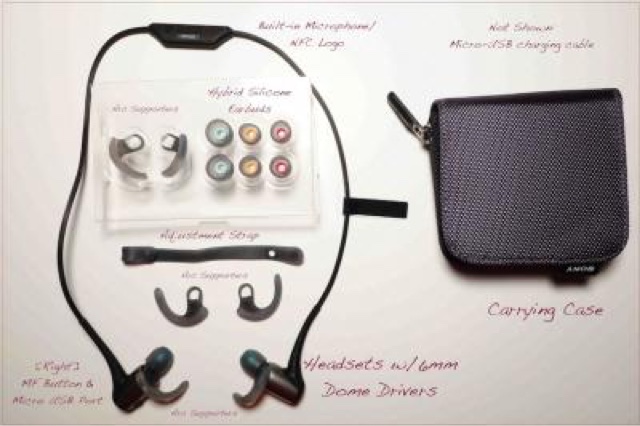 Getting new tech is always exciting and I wanted to test them immediately. This, though, was not intuitive and I did think that I might have the wrong ones as they seemed to be for android (I use Apple iPhone). I eventually figured it out and got them connected only for the sound to be inaudible.
With the phone at full volume I couldn't hear anything except the wire rubbing on my neck. As excited as I was by Santa's delivery I was now disappointed. A quick search online for the manual revealed the way to increase the volume.
There's a small button. Actually it's more a pad than a button on the right earphone. It's a multi function button. You press it in various configurations, a bit like morse code, to do things. For example a long hold powers them on and similarly powers the off. These functions are met with a short jingle.
To play is one press and to stop or pause is similarly a single press. Two presses skips to the next song and three goes back a track. Volume up is more tricky being a short and long press in quick succession.
This took me an age. How I still have the headphones is beyond me, I came so close to throwing them out of the window. For the first week or so that I owned them I didn't use them as they didn't work. If I had kept the packaging I would have returned them.
Then I figured it out. The button that you need to press is more pad than button and when it says press it means touch or tap. Just like you would tap a table or phone. You just tap the button and it works.
Having figured the subtleties between press and tap I now love these earphones. They work! Which is all I wanted. They are lightweight and despite being quite chunky in what goes into the ear (actually its the bit that sticks out) they feel really secure and never like they will fall out. I have run miles and miles using them and not had an any issue.
Pairing can sometimes be frustrating and this evening before running home I had to 'forget' the headphones from my iPhone and then reconnect. Not sure why this happens as there's no pattern but this does work.
Overall these are good headphones, they do have better sound than the wired Adidas/Sennheiser ones I was using previously. The controls are ridiculously fiddly and they are a little bulky but unless you're wearing a beanie over them they don't look too bad. Think Frankenstein with the bolts in your ears not the neck.
What would have made these great would be a better multi function button and perhaps hiding some of the tech that's contained in the ear units into the wire. That said these are great sounding headphones and at a good price for a reputable brand.
It's not really a problem at all to run with wires but running without them is disproportionately better.
Posted by justmmb at 8:35 PM