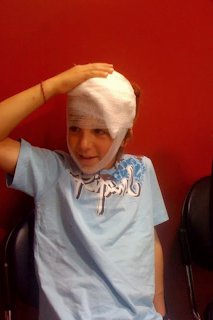 This is something that I have been meaning to blog about for some
time. It's an episode that took place on the August Bank Holiday in
2009 and is about my diabetes and how important family that know about
it, however young they may be, are.

We had been to Broadway for the day. An idyllic Cotswolds village.
It's a beautiful place, a nice quaint high street some interesting
shops and it now has a really great children's playground. Swings,
slides, a small climbing wall, climbing frames, a death slide - it
really is great. One of the toys in the park is a see-saw but unlike
the traditional see-saw its inverted. So the pivot is high. My two
kids were on it and then something happened. Luca got off it and as he
did so he ended up underneath the seat, which had pivoted high and
then crashed down on top of his head.

He went down and there was blood. A lot of blood. He had a split in
the top of his head and blood was pumping out of his head. Someone
helped us and gave us some tissues to put the wound. They quickly
became useless soaked with so much blood.

With the wound not sealing and blood continuing we made the decision
to call 999. A paramedic arrived from Worcester hospital and said we
need to get Luca to hospital. He would take him. Sue and Luca went the
paramedic Amélie and I followed in the car.

I have no idea how long all that took place over. It wasn't long. The
other point here is that Luca was very calm. Once he'd calmed down
from the initial whack on the head he was ok.

Amélie and I got to the car and headed across to Worcester hospital.
This is where it got interesting for me.

When we arrived at the hospital it appeared deserted. We walked in and
were in a long empty corridor. The mix of adrenaline and shock at
seeing your son in that condition was wearing off and my blood sugar
was dropping. I started to wobble and was struggling to keep a
straight line, read signs and all the normal symptoms associated with
a hypo, a low blood sugar.

I was bumping into Amélie and struggling. This is where she was
AMAZING. She could see me struggling and was worried that I would
fall, so she pushed me right up to the wall so that I was walking
right next to it. That made it impossible for me to fall that way.
Then she put herself on my other side so that she could feel if I were
going to fall she would feel it and push me the other way towards the
wall. We made our way like that until we reached the A&E department.

She then told Sue that I was in difficulty and needed something. I
was then taken care of in the hospital and things stabilised pretty
quickly.

Amélie was 7 during this. She was brilliant, mature and aware of what
was happening. She didn't panic or get scared, or didn't show it, she
just looked after me.

It was a humbling experience and one I will never forget.
Posted by justmmb at 4:08 PM

This morning highlighted what i have known for months, years but made it really clear.

Sunday mornings i normally do a couple of hours on my bike. I've been cycling as my knee has been knackered so i've not been able to run. This morning was the Cheltenham Sportive from the Sandford Parks Lido, an 88 mile sportive around the Cotswolds.

I knew a couple of people doing it and last weekend was feeling pretty keen to do it myself.

Then the weather changed, our summer was last weekend, since then it's been progressively windier and wetter. I pulled out of the sportive, not that i had actually entered.

I did then plan, instead, to do a couple of hours on the bike and follow that up with a short run. This has been my approach over the last week or so. Cycle home and then do a short run.

It's felt great to be running on roads again.

This morning i dispensed with the bike altogether and just went for a run. Nothing earth shattering. Just shy of 2.5 miles in a little over 20 minutes. It felt great, no issues with the knee with legs and lungs feeling great.

I still need to keep it slow and steady and not get too carried away. I know what i am capable of in recovery, when i had cruciate surgery i ran a 41min 10km x-country within 6 months. This last op was nothing like that so i expect to be able to steadily increase mileage and time over the coming weeks. 5km is the target next weekend - might even try it at Cheltenham Park Run if all goes well this week.

The point being that i am a runner and that is what i love and what i daydream about doing. I don't daydream about riding my bike, never have.
Posted by justmmb at 4:01 PM