Yesterday (12/09/2010) was the OSS River Dart 10km swim event from Totnes to Dittisham. It was a great event and i have blogged about it here.
This was a challenge on a mental and physical level but also presented challenges to me regards my diabetes and how to control it in an event of this nature.
I had checked with the organisers up fron what the nutrition availability would be and was advised that there would be aid stations every 2/2.5km. Not able to really carry anything myself it was important to know that so i could make the necessary plans.
What i had planned was to start with a high blood sugar and then keep it topped up at each feed station. With around 30-40minutes between stations it would be vitally important not to miss one and to make sure i took fuel on board. I had also put a couple of gels and packet of glucose tablets on the support boat so that if things went wrong i could get what i needed quickly. To this end the organisers were well prepared with anyone with medical concerns being given a white hate to enable quick identification by the support crews.
When i got up at 5am my blood sugar was 11.7mmol. I ate breakfast of ready brek in the van on the way and gave myself 3 units of Lantus. I then ate a Trek flapjack about an hour later. When we arrived in Totnes i did a blood test and my blood was around 10mmol with around 1.5hrs to the start.
With about 45mins to the start i ate a couple peices of cake to give me a boost. I then got changed and was ready to go to the start. The last thing i did was another blood test. My blood sugar was 17mmol. Higher than i was expecting or than i really wanted but i figured that the only way it was going was down and that if the worse came to the worse i could sort it out at the end.
At each aid station there was half mars/snickers bars available and powerade. At each of the three stations i ate a peice of chocolate and had a drink. Very aware that in an event such as this symptons of a hypo may be masked i made sure at each aid station to take a few seconds and make sure i felt ok.
At each station i felt fine and was able to push on with confidence. Also the number of support people also gave me confidence that were i to get into difficulty i would be able to get assistance very quickly.
At the end of the event i picked up my kit and did a blood test. The reading was 6.5mmol. Perfect!
I ate some rice and ratatouille not bothering with an injection as previous training and competition experience has shown me that after an event there's no need for insulin as this often leads to a hypo.
All in all the nutrition ended up being perfect although this  was a little by luck as i was not expecting to be so high at the start. Propbably a better approach could have been to be lower at the start and to then fuel more during the swim.
It's all experience though and next time i'll be better prepared!
Posted by justmmb at 10:10 PM

A couple of months ago Martin sent around an email from the OSS to see if anyone was interested in doing a 10k swim down the River Dart from Totnes to Dittisham. He meant this as a joke but today we did it.
After deciding against camping and B&B options in and around Totnes for the Saturday night we settled on driving down on the Sunday morning. Meeting at Esporta in Gloucester with Mark taking us down in the mystery machine (VW Transporter). We set off at 5:30 with the Tom-Tom confirming a 2hr trip. There was lots of snacking and hydration taking place in the car with rice pasta salads, jam and peanut butter sandwiches and cold porridge all being eaten in preparation.
We got to Totnes after an uneventful journey around 7:45. There was a small throng of people gathered and hanging around the registration. The sun was not fully up and so temperatures were on the low side, I regretted wearing shorts! The toilets were a little walk away and with all that hydration is an inevitable consequence! Not only for the three of us but seemingly for everyone else involved too!
Registration was simple enough although we all had to complete the form that we had already completed online previously. The volunteers on the registration desk were all very nice, helpful and friendly despite the early start and that it was cold! 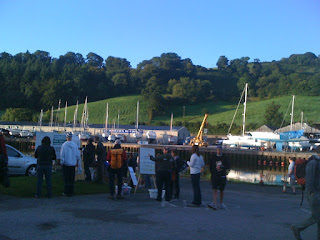 The event, it wasn't a race, was to start from 9am in four waves. Wetsuit compulsory with exceptions by prior agreement only. Waves determined by how fast you could swim a mile were set. Martin was in Wave 1, Mark in Wave 2 with me in Wave 4.

Martin got himself kitted up, sucking in the gut as much as possible in the unforgiving wetsuit, something i think all the men did at one point if not every point where they were out of water! He was to go off first. Nerves were kicking in and the usual banter started up. In reality that he completed this swim is pretty incredible when you consider that last year he could not swim. In less then 12months he's gone from that to having completed the UK Ironman triathlon and now a 10km swim. Inspiration for anyone who think that they "cannot"... 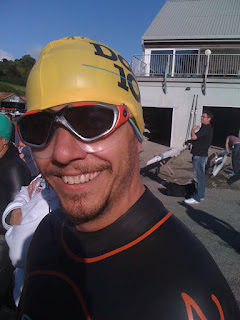 There was safety briefing (i learned that hypothermia can still set in up to 6hrs post immersion which is pretty scary really) and then they were underway, a little late, getting into the water around 9:20. 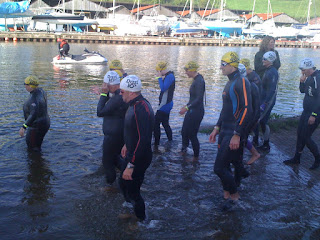 Mark was in the second wave and got away around 20minutes after Martin. Running late the organisers were running around the car park to get wave 4 away as close to on time as possible. 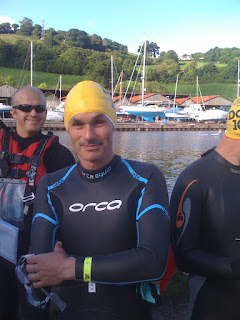 Wave 4 started at 10:08 - very precise and i can only remember as i was asked the time by a couple of people around me. I was nervous getting in to the water as everything had been about the temperature of the water and how to keep warm.


(i'm there somewhere!!)
Getting into the water i was pleasantly surprised that it wasn't that cold. I was wearing swim boots, wetsuit and two swim caps (with my Zoggs Predator goggles too). I dived in and set off. Then there was the shock, my forehead was freezing. Right above my eyes where my head was pushing through the water it was really painful. This did calm down and really for the rest of the swim i was pretty comfortable. Occasionally i felt cold in my quads which was remedied by remembering to kick while i swim!
The first half of the swim was awesome.....there were aid stations every 2.5km. I was at the second aid station, 5km in, in 01:01:00! I was stunned and thought fleetingly that maybe 2hrs was possible! How naive.

The first 5km was fast as there was some good tidal assistance with the tide going out. As the river widened the tide at the edges of the river dropped off and so it was more about your own steam. Negative splits for me were not going to happen!
The swim itself was uneventful really and for me that was the difficultt part of the whole event. The last 2.5/3km from the final aid station to the finish was really hard. It was tough physically with my stroke getting more and more ragged and my arms going out wider and wider but there was nothing mentally to get a lift from. No crowd, no-one to cheer and spur you on. It really was about digging in and making it happen yourself. It is this that sets swimming apart from every other event that i have taken part in, whether it be 10km, triathlon or marathon. There's always someone to give you a boost. In that respect swimming is perhaps a truer reflection of your determination and sheer guts...

The finish was visible from just over a km out and on this stretch i made ground on a number of swimmers. Coming into the finish at Dittisham was a surreal experience. Disorientated, exhausted, emotional and unable to stand! My legs were gone from under me and in the thick mud it was quite difficult to stay upright. The organiser was there to offer congratulations and help me and everyone else out of the mud. My legs started feeling like they were mine and so it was time to get my bag and get changed.

I scanned the other bodies as i made my way to the baggage reclaim looking for Mark and Martin. While i had hoped that i would catch them on the swim i didn't really expect to. I checked my time, i'd completed it in 02:32:55. I was expecting to do around 3hrs-3:30 so was really pleased with the performance.

As i got changed i phoned home to let them know i was still alive - i then spotted Mark looking well and getting changed. Some 20mins or so later Martin emerged from the water looking like a drunk after a fight...clearly in difficulty after more than 4hrs of swimming he got himself together and recovered well.

A plate of hot food and a couple of cups of laterand we were on the bus back to Totnes.


The drive home was full of tales of the swim and banter abounding as you'd expect.


It was an absolutely brilliant day out and an event i will remember for a long time.


The organisation for the event was excellent - all the comms leading up to the day were excellent and straight forward and on the day the number of volunteers and safety staff was excellent. The environment felt very safe and made for a very relaxing experience.
Posted by justmmb at 9:49 PM