At the weekend in Berlin the mens marathon world record was broken and now stands at 02:03:38 set by Patrick Mackau, a 26 year old Kenyan. A remarkable achievement and surely a sub-2hr marathon will be achieved in my lifetime?
It begs a question though - is it harder on the body to run a marathon in a little over 2hrs or is it harder for the non-elite runners who are out there for 5+ hours? The elites will be full time athletes, training, eating, sleeping, recovering and little else. All with the objective of getting as close to 2hrs as possible. Contrast with the non-elite who works a full time job, has a family, has social commitments, kids to get to clubs. A house to maintain. Maybe a commute. Then fits in training. Somewhere probably at the start of the day, in a lunch break or maybe the end of the day when all is done.
To run at close to 2hrs is a huge physical undertaking that will take a lot from the body and clearly needs a lot of effort to be able to execute. Running for 5+hrs at a much slower pace though will take a massive toll on the body too. While the pace is not as demanding the time on feet is. The mental pressure will be immense too. Keeping yourself going for that long will not be easy.
What do you think? Remember there are no stupid questions only stupid answers!
Posted by justmmb at 4:10 PM

easy, light and smooth - an evening with Caballo Blanco 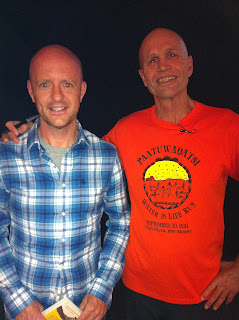 There was plenty of inspiring stuff too - about how anyone can run 100miles if they train and put their mind to it. How if you do run 100miles that you know you can pretty much do anything. How we have all had some adversity to deal with and that he's no different to anyone else. If you have faith (in whatever it may be) you can pull through. When he talked about faith I got the impression he was talking about confidence. When you're out on a trail you have faith that you are trained enough to go where you want and get back. You are confident enough in your abilities.

He answered questions with the same enthusiasm that he had talked, thanking people for the questions and checking that he had answered it satisfactorily. You got the feeling that he would have continued for hours were it not for the promoter asking him to wind it up.
There was time for some photographs and autographs with nearly everyone having a copy of Born to Run for him to sign. 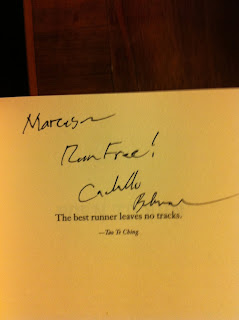 When I left I felt quite uplifted, inspired and motivated. Here was a guy who appeared to have found an idyllic simple life where he had very little and wanted for nothing.

A meeting with a New York Times reporter changed all that forever but rather than sell out or profit from it directly (there's no such shoe as a 'Nike Blanco') he's using it to support the people that he feels a connection to. To support them and help maintain their way of life (http://www.norawas.org/). To ensure that they have food enough to be able to run. That he referred to non-Raramuri as 'Gringo's' but not himself tells you where he and his heart are.

This weekend was the Cheltenham Triathlon at the Sandford Park Lido, a fantastic open-air 50m pool in the heart of Cheltenham. It's a super-sprint event that appears to be growing year-on-year with around 700 entrants this year. My finishing time (for the 500m swim, 15km bike and 2.8km run) this year was 53:15. An improvement from 2008 where my time was just over 55minutes. @stoddy38 also improved on his 2008 time finishing in 52 minutes and change.
This then sparked a conversation that I have had with Stoddy a number of times. Namely at what age do you stop improving on your times and they start to deteriorate? This is as, almost without exception, whenever we have done an event the next time we do it we have improved our times and last I checked we're both ageing at the same rate! There are a number of factors that contribute to this not least of all the starting position!
1. You can only beat what's in front of you
When I started training I was in my late 20's although I would say only seriously when I was around 30/32. I didn't really do sport as a kid and only got going in my 20's playing football socially with work colleagues and the like. Occasional games of squash. This at the same time as being out a lot drinking and eating rubbish! It was during this period that I did my first marathon. London in 1997 finishing in a grand time of 4hr 20mins. Hardly tearing up trees but I did it. I then got married and had a son and so things went on hold until I started running again in my early 30's with work colleagues. I was out of shape and struggled to keep pace with guys that were up to 20years older than me. This is where I got hooked and started running properly. This then evolved to triathlon. When I trained for my first tri (Tewkesbury Sprint) I wasn't very scientific about training. I ran, biked and swam a bit. That was it. Fit enough to get around I did just that. Later that year I did Windsor Olympic distance and was in better shape but hardly brilliant.
What I learned though was what I needed to do. So more structure, smarter training and better eating etc to get a better performance. Over three years competing at Windsor I took nearly 15minutes off my first time despite being 3 years older. This trajectory sounds impressive (and I am proud of it) but is essentially down to the fact that my starting out times and performances were very average. My marathon time and PB illustrates this perfectly - aged 27 I completed London in 4:20; aged 38 I completed Gloucester marathon in 3:15.
2. Smarter
As you train, particularly in triathlon, you get into the lifestyle. Magazines, books, novels, websites - total immersion if you will. Everything is full of advice, the best kit, the best food the best races. How to swim properly drills. Brick sessions. As a newbie it's all a little daunting but over time I believe that you assimilate this knowledge to the point where you can even diagnose injuries. As knowledge improves so does performance (if you actually follow it I guess). Becoming a smarter athlete will improve your performance.
3. Experience
The first time you do it you don't know what to expect so maybe perform within yourself to ensure that you do not DNF. Once you have experience of a number of races and hours of training then you can push on in races with greater confidence.
4. Diet and Lifestyle
As I have matured (coughs) I drink much less alcohol, eat much less junk and get more sleep. That's bound to help?
So what's the answer? I think that there is little limit on performance that we do not control ourselves. I know what I need to do to be race fit, its up to me to do that or not. I think my performances will continue to improve as my knowledge continues to do so and each year I think I am probably a little bit more healthier holistically. One thing for certain is that whenever my times start to deteriorate I will continue to train and take part in events as ultimately that's a small part of the reason for doing it. The benefits of fitness, health and vitality are much stronger reasons for continuing in this direction than watching the clock.
Posted by justmmb at 1:42 PM

I manage an U12's team and was recently at a meeting for the football club. It was a standard meeting with discussion around kit, pitches and the like. When we got to AOB the vice chairman raised a point regarding referees. The point was basically that we are responsible for our parents and ensuring that referee's do not get abused and hassled from the touchline. This, in particular, relevant to mini-soccer where young referee's are started in their careers and are normally young lads themselves.
Mini-soccer is 7-a-side played by U9's and U10's. So there are parents that are so fired up watching their 9 year old play football that they are abusing a referee that is maybe 15 or 16 years old. Say that out loud and doesn't that sound horrendous? Football inspires passion, sure, but the perspective is completely gone. What is happening is that young referees are leaving the game as there's too much hassle. It's just not worth it.
Take this forward in another direction and there's the dream team mentality. Again I am talking about youth football here, U11's, U12's, U13's etc. It's great to be competitive and in some respects this opinion is easy to have as I am fortunate that the team I manage is competitive. In three seasons we have finished 3rd in the league twice and 4th on the other occasion (Champions League places!!), been cup runners up and cup winners. Not too bad.
We've done that in a framework of inclusivity. I have some terrific players in my squad, players that would get into any other team in the league. I also have some players who are not as strong. What they do have though, across the board, is friendship. The core of the group has been together since they were 5 or 6 years old. They have evolved from being a collection of kids running about chasing a football to a team that are contenders in the division.
They have done this as a group, they have grown as players together for a number of years and hopefully will continue to do so. The players now have a loyalty to the team and to each other. The lessons being learned are as much about friendship, camaraderie, loyalty and fun as they are the technical and tactical aspects of the game itself. I am not suggesting that we are the only team like this, far from it and I would hope that there were more. What I am doing is drawing a distinction between teams across the divisions that poach players from other teams, take better players with a view to creating a dream team. It must happen everywhere. I've heard stories about managers falling out with players. Again, say that out loud, a 40 year old man falling out with a 10year old that plays in his team. Horrendous. Players being approached by other teams with promises of what? Come to us and you will win?
It's the win at all costs that is the harmful factor, if young players are being encouraged to switch teams to win what are they learning? What happens if they then don't win? Parents and coaches on their backs? Or do they blame the ref? You get an increase in pressure and as the team has been assembled there may be little by way of solid relationships for the players to support each other. Do you win and lose as a team or did the defender make a mistake that cost us the game?
Youth football should be as much about learning the values of teamwork, friendship and loyalty as it should be about the game and winning. No-one likes to lose but how you lose is important, probably more so than how you win.
Posted by justmmb at 4:24 PM